In their own words, FFmpeg is “A complete, cross-platform solution to record, convert and stream audio and video.”

I’ve been recording Bangpypers videos for the last few months and I haven’t really had access to a proper solution to edit videos and audio that I could have got for free/ low-cost. A good friend of mine, Vinay Keerthi, (who incidentally presented the webinar under discussion) told me to chuck GUI based fronts for editing them and told me to try FFmpeg, the CLI tool directly, which these tools probably use in the background anyway.

So I gave it a shot. And while it isn’t very hard to break into, there are a lot of things that aren’t very straight-forward. But it’s definitely a treat to use and it gives you a sense of satisfaction when things work.

tl;dr - I basically just edited a couple of videos using a CLI tool. No biggie. But the potential it opens up for me by way of not having to ever download an illegal copy of a GUI based tool (don’t tell anyone I did this) or be restricted by what they offer doesn’t have to be the case anymore :)

So I’ve mentioned above about videos recorded for Bangpypers. This particular case today was for editing one such video.

There were a lot of experiments I did in the process.

For now, here’s a working set of steps:

Commands for steps above:

The net result of this learning can be viewed at our Bangpypers Channel - https://www.youtube.com/watch?v=xickNijifOs

Chronicled some more of the commands here -

I made a lot of mistakes in trying other stuff but learnt quite a bit in the process. Here’s a glimpse of the commands tried - 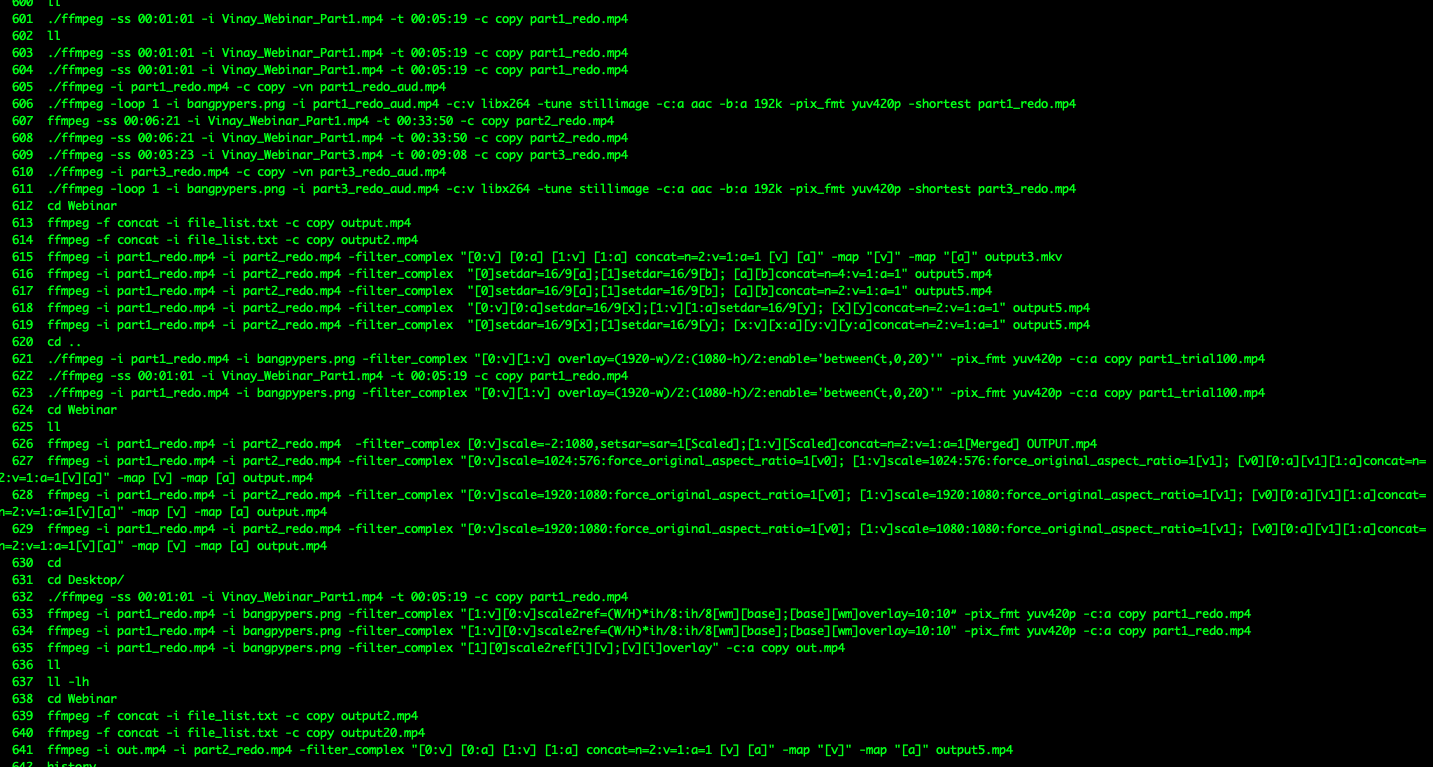 I hope this helps you if you’re looking for help with FFMpeg. Feel free to mail/tweet at me if you have any issues!

Bangpypers is one of Bangalore’s largest Python User Groups. We conduct Meetups where we have talks and workshops on topics related to Python. Feel free to reach out to mail me in case you want to talk at any of our upcoming sessions. We conduct one every month. More details regarding meetups at https://www.meetup.com/Bangpypers/. We’re also on Twitter!